The big refugee movement to Europa in 2015 and 2016 caused EZA to co-ordinate projects again on the issue of migration. The aim of the six seminars held in different regions of Europe was to flag up in which areas and ways workers’ organisations could assist refugees, in many a regard defenceless, in exercising their rights in the labour market.

There was agreement that the wide-ranging forms of exploitation to which refugees are exposed in the labour market must be actively combated. In particular, workers’ organisations should focus on health and safety at work, ensuring that working hours and wages are calculated properly, as well as equal opportunities for women, and feel responsible for informing refugees about labour law and about their rights and duties at work.

In the seminars, several times politicians were called on to open up possibilities of an early entry of refugees into the labour market – even during the asylum procedure – in order to prevent exploitation and promote regular employment. Some examples of best practice made it evident that integration efforts and initiatives on a local level – involving the local government and in conjunction with local companies – were especially promising.

The project co-ordination seminars also cast an eye on the causes of the refugee movement: for instance, there was criticism of the role of some multinational companies whose unregulated activity in the refugees’ countries of origin deprived them of their livelihood. This is why participants called for a rethink.

The brochure is available in Czech, English, Spanish, Hungarian and Italian. The author is György Lajtai. 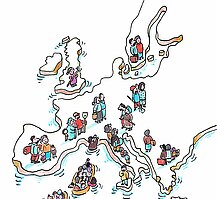