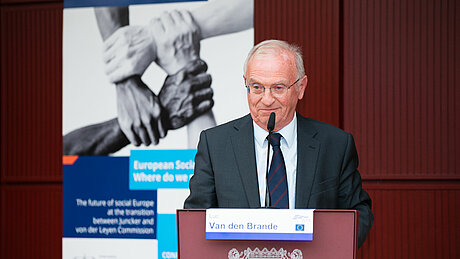 EZA: Luc, today (16.09.2020) the president of the European Commission, Ursula von der Leyen, gave her first State of the Union speech. She began by talking about workers‘ rights and the dignity of work in times of crisis. What does that mean for the importance of social politics?

Luc Van den Brande: President von der Leyen rightly said, that our social systems are the engine of our economy and the engine of our recovery from the crisis. We as EZA fully agree with that. EZA advocates a social economy based on social dialog. If she’s focussing on that point at the beginning of her speech it clearly shows how important socials politics and workers‘ rights are for the future of the union. We should take that as an inspiration and an acknowledgment of our work.

Luc Van den Brande: I think it is a crucial tool to prevent the exploitation of workers whereas young people and women are most at risk. But we have to achieve that wisely. As von der Leyen said, there are different ways how we can get to agreements. She is seeing the strength in collective bargaining but also in collective state agreements. We can agree on both ways. But unions are under pressure and in some Member States social partners are neglected. What matters the most is that work pays off for workers and serves for a decent life. It strengthens also the economy and job perspective. There is still work to do for upward convergence

EZA: Von der Leyens second promise is economic and social stability. She even mentioned that due to our social economy we have coped a lot better with the crisis than others. In your opinion: Is that correct? And if so how can we strengthen that?

Luc Van den Brande: This is perfectly correct. Of course, there were some troubling challenges in the beginning but still, the crisis has shown that the European countries do live in solidarity with each other. It also proves that European Instruments, such as the short-time-work, prevented massive job losses as we’ve seen them in other parts of the world. I think president von der Leyen didn't exaggerate when she said that we can be very proud of our unique achievements such as the Next Generation EU program or the European Green Deal. The decision to engage 750 billion euro for the recovery of COVID -19 is an important shift towards continued solidarity as long it’s implemented in a fair way and taking in account the people most hit by the pandemie.

EZA: Speaking about the Green Deal: The Commission wants to invest more then 37 percent of the Next Generation EU Budget directly on European Green Deal objectives and in a Just Transition found. What does that mean for workers?

Luc Van den Brande: The EU wants to find a way how to reduce carbon emissions by 55 percent within 2030 and at the same time raise the competitiveness of our economy. It seems like a paradox at first but if we look closer we can see that there are enormous oportunities and possibilities – especially for workers. Let’s take the example of the construction sector, she has mentioned in her speech. If we can change this huge sector from a carbon producer to a carbon sink with innovative technology we don’t just contribute to preventing the climate collapse but we provide decent workplaces for millions of people. Until we reach that we have to ensure that there is a just fair transition for all regions in Europe.