Conference on the Future of Europe (CoFoE) workshop series presented 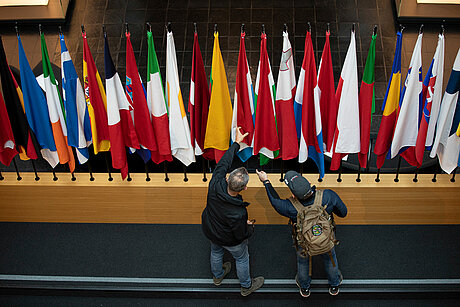 The Conference on the Future of Europe (CoFoE) plays an important role in the work of EZA. In order to contribute to this initiative of the European Commission EZA has launched a series of workshops. The purpose is to prepare and initiate proposals for the conference.

The first of the three workshops took place in October 2021 and focused on topics such as EU values, the rule of law, and democracy. Professor Dr. Léonce Bekemans, Jean Monnet Chair ad personam, started with an overview of EU values and how they are anchored in EU Treaties. “The European model that combines social security and economic solidarity with shared values of freedom, democracy, and rule of law is at stake.”, said professor Bekemans. For the professor, it is clear that there must be a vision for a more coherent, democratic, equitable, and sustainable future.

In his presentation he focused on article two of the Treaty of the EU (TEU): “The Union is founded on the values of respect for human dignity, freedom, democracy, equality, the rule of law and respect for human rights, including the rights of persons belonging to minorities. These values are common to the Member States in a society in which pluralism, non-discrimination, tolerance, justice, solidarity, and equality between women and men prevail.” More importantly for the worker's organizations:  social dialogue (Art.154 & 155) is part of the legal base of European values and democracy.

The TEU also defines the elements for representative democracy and for participative democracy. EU must connect with the citizens and involve them in the policymaking. The professor indicated that the EU has already achieved a lot in this regard, but there is still much room for improvement. Professor Bekemans underlined Apart from the ethical and legal input he gave practical suggestions: First, he proposed to build a best practice of cooperation and communication internally and externally in dialogical frameworks. After that, it is crucial to display that people can live together in the world, in respect of differences. This is followed by improving the social dialogue, being the pillar of the European social model to make social and economic systems more socio-economically efficient and ecologically sustainable. At last, it is indispensable for the EU to play a more courageous and dynamic role in the international political scene by defending its model of peace and transnational cooperation and by strengthening its method of collaboration with other macro-regions.

Professor Bekemans was followed by Hanna Werner, postdoctoral researcher of the Democratic Innovation and Legitimacy Research Group, KULeuven. She focused on the research results of participative democracy which she underlined by the latest results of OECD’s publication which deals with innovative citizens' participation and new democratic institutions. She emphasized that the widespread dissatisfaction with politics is in need of an answer. The solution is to involve ordinary citizens in political decision-making. Best practice examples can be found around the globe as participatory processes are on the rise.

Mrs. Werner presented facts and figures about referendums, participatory budgeting, and deliberative mini public. Research results indicate that citizens who participate are better informed about issues, standpoints and views of others. Furthermore, they develop a more favourable attitude towards organizing authorities. Participatory processes can be a way to bridge the gap between citizens and politicians and rebuild trust. But when citizens have suspicions about the process being just for the show, there can be a potential backlash.

In summary, professor Werner stated that participatory processes are no catch-all solution: they sometimes work and sometimes don’t. Apart from that, it must be understood that participatory processes as a communication tool between representatives and citizens and between citizens themselves. Given all this, genuine engagement and respect are the key.

During the second part of the workshop, the participants were encouraged to put their proposals on the table. These proposals will be the basis for the further discussion of the EZA’s input. Some demands will be presented in the following:

The next workshops will take place on Thursday 16th of November 2021 at 3 PM about Health in the EU and Tuesday 18th of January 2022 about Climate.