Using the crises as a motor for change and social transformation 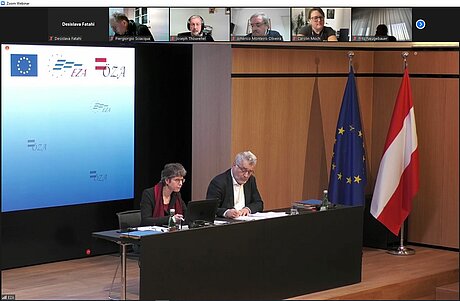 Around 110 participants debated the digital, green and social future of Europe at the EZA launch seminar. Workers' representatives from 24 countries took part in the meeting on 25 and 26 November, which was held online due to the pandemic.

They addressed the question of what lessons Europe is learning from the pandemic and whether it is ready to seize the moment - the kairos - for a truly sustainable and social transformation of the economy and society. The launch seminar was organised in cooperation between the EZA Secretariat and EZA member, the Austrian Centre for Workers' Questions (ÖZA). In his opening address, ÖZA President Norbert-Schnedl pointed to the de-solidarisation of society. Reinforced by the pandemic and social media, more and more radical views would be spread, which would become a danger for developed democracies that we must all vehemently oppose.

Field reports: Effects of the pandemic

Traditionally, members of the EZA network report on experiences from their respective countries during the kick-off seminar. Joseph Thouvenel from CFTC (Confédération Fraçaise des Travailleurs Chrétiens) described the situation in France. More than 300,000 jobs were lost in the crisis. In addition, inflation posed great challenges for workers, which were unequally distributed between men and women. At the same time, a trend towards urban migration was observed in France due to the possibility of home office. Americo Monteiro Olivera (ECWM) described the situation in Portugal. State support had only reached official work. The problem in Portugal was that workers in the informal economy had no social security.

Longing for the "New Normal after the Pandemic

Friday began with critical thoughts from Professor Paul Zulehner and two business representatives. Zulehner described the new social question that has been accelerated by the pandemic: In the 19th century, the political answer to the social question was the labour movement. "Who is taking on the role of advocate for the losers in our economic system today?" asked Zulehner.

A digital and green EU - How does the transformation succeed in a socially just way?

Tim Joris Kaiser from the Representation of the European Commission in Austria presented the goals and mechanisms of the so-called EU Build-up and Resilience Facility, with which the EU wants to promote the digital and green transformation of the EU economy for the Next Generation EU with € 750 billion. In the discussion, the recovery plan was welcomed in principle, but at the same time considerable doubts were expressed as to whether implementation by 2026 was realistic in view of labour shortages and material bottlenecks.

Professor Levermans from the Potsdam Institute for Climate Impact Research used the latest research results to underline the fact that a transformation towards a sustainable economy is in the very own interest of the economy and society. He warned that increasing weather extremes, such as floods, heat waves or hurricanes, are mutually reinforcing and that the economic damage caused globally would be much higher than previously assumed.

Jörg Tagger from the European Commission's Directorate General for Employment underlined the numerous EU initiatives accompanying the recovery fund to strengthen the social dimension and social dialogue. The Commission had actively and intensively addressed the problems of workers. The concrete implementation also depends directly on the commitment of the social partners.

Conclusion and demands of EZA

"The EU must become stronger as a community. The member states alone cannot create global solutions". This opening statement by EZA Co-President, Piergiorgio Sciacqua, was also echoed by President, Luc van den Brande, in his closing remarks. "We need a further development of the globalised world beyond pure geopolitics to a geosociety that rethinks its future and develops the social market economy into an eco-social market economy. The pandemic must be a wake-up call for us and encourage us to reflect on essential tasks of our society and to take action. The values of EU democracy such as the rule of law and human dignity are primordial in this.  As Christian social workers' organisations, it is up to us to be a source of inspiration for others and the voice of the losers and the socially weak!"