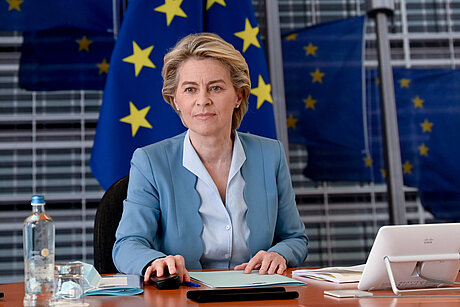 In her 2022 State of the Union speech, the president of the European Commission, Ursula von der Leyen, announced a new European care strategy to support men and women in finding better care and life balanced. In her speech, she referred to the applause across the EU for the critical workers. She underlined how much society has relied on all persons who worked for lower wages, fewer protections and less security during the pandemic.

On 7 September 2022, the European Commission published its communication on the European care strategy, which aims to address three issues.

The first is that formal and informal care has been executed mainly by women, namely 80 % of the caregivers. The second is that there is a severe amount of nonpaid work in the care sector. When it is paid, wages are mostly too low. This has consequences on an economic scale: Unpaid care responsibilities keep around 7,7 million women in the EU away of participating in the labour market. Thirdly, there is a shortage of caregivers which makes long-term care and childcare unavailable, inaccessible, and unaffordable in many situations.

The communication focuses on childcare because this service has the strongest impact on gender equality regarding work. Also at this moment, surveys show that families with higher income use childcare services much more frequently than lower-income families. A first step to address this issue is the increase of the Barcelona targets for participation of early childhood and children in education.

The second key proposal of this strategy is to increase access to affordable high-quality long-term care. This long-term care is very crucial for older people. Several steps are needed to realize the adequacy, availability, and accessibility of long-term care services, such as improving working conditions and upskilling and reskilling opportunities in the care sector, while highlighting the significant contribution made by informal careers and their need for support. Moreover, these measures should be supported by sound policy governance and sustainable financing.

Overall, the further improvement of the working conditions of care workers remains a priority in order to make the jobs more attractive and contribute to a better gender balance.

The European Commission aims to implement a national coordinator and a nationally coordinated plan for each Member State. The strategy underlines the importance of social dialogue in this matter. The EU can only call for a common strategy, but the real competence is situated in each Member State. The Commission intends to strengthen data collection to have a clearer view of the reality of the field. The platform for care services in Europe (Eurocarers) argues that the strategy is heading in a good direction, but financial support is not sufficiently enough developed in the strategy.  AGE Platform Europe (the voice of older persons at EU level) underlines the need to advocate on a national level to stress the strategy as an opportunity to rebuild and improve the systems.