The goal is a decent life - no matter where the workplace is located. 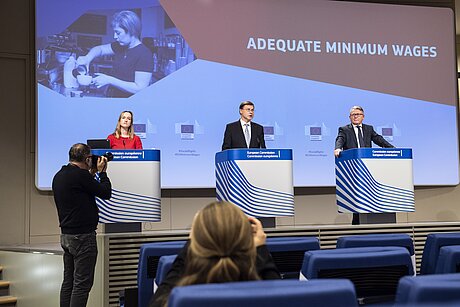 On 28 October 2020, Valdis Dombrovskis, Executive Vice-President of the European Commission, responsible for an economy that works for people and trade, and Nicolas Schmit, European Commissioner for Employment and Social Rights, gave a press conference on fair minimum wages following the weekly meeting of the College. (Photo EC - Audiovisual Service) 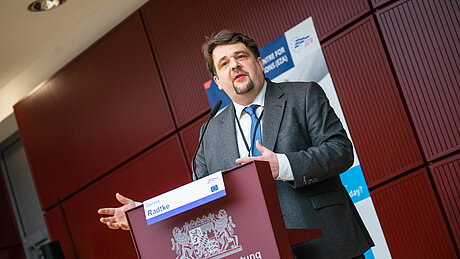 The European Commission proposed an EU Directive to ensure that the workers in the EU are protected by adequate minimum wages allowing for a decent living wherever they work. In a short summary find the highlights of the most important elements of this proposal.

The scope of the Directive are all workers in the Union who have an employment contract or employment relationship as defined by law, collective agreements or practice in force in each Member State, with consideration to the case-law of the Court of Justice of the European Union.

For the statutory minimum wages the directive seeks for adequacy with the aim to achieve decent working and living conditions, social cohesion and upward convergence. They shall define those criteria in accordance with their national practices. Relevant national legislation, decisions of competent bodies or tripartite agreements.

Those criteria include at least the cost of living and the contribution of taxes and social benefits, the general level of gross wages and their distribution, the growth rate of gross wages and labour productivity developments. Under certain conditions there can be different rates of statutory minimum wage or deductions.

The Member States shall take measures to ensure the involvement of the social partners in general and certainly for some regulations of the Directive. There are measures asked to ensure the effective access of workers to the statutory minimum wage, like controls and field inspections.

Read the full text of the proposal

Dennis Radtke MEP and EPP Group coordinator in the Committee on Employment and Social Affairs (EMPL) comments on the European Commission's draft on the minimum wage:

"The European Commission presented its draft for a European minimum wage on 28 October 2020. Contrary to what the name suggests, it does not provide for a centrally fixed uniform minimum wage for all EU countries.

The discussion about the minimum wage is a topic which has been debated for a long time in the European Union. The economic crises of recent years and the current Corona pandemic have made the creation of fair minimum wages for all workers in the EU an increasingly important priority. In November 2017 a first important step was taken with the initiative of the European Pillar of Social Rights. It gives workers the right to a fair wage that enables them to enjoy a decent standard of living. On 14 January 2020, the European Commission finally launched the first phase of consultation with the social partners. On the basis of the replies received, the Commission concluded that there is a need for action at EU level.

The second phase of consultation with the social partners was launched on 3 June 2020 on the possible content and an appropriate instrument, before the Commission's formal proposal was presented on 28 October 2020.

The Commission's proposal, however, in no way provides for a single minimum wage to be set for all Member States and also respects the national competences and the contractual freedom of the social partners. It also strengthens collective bargaining as an essential component of the social market economy and the social partners. The member states thus retain their autonomy, but in future they must set their minimum wages according to certain criteria such as purchasing power, productivity, wage trends and income distribution. Commissioner Schmit's proposal is for me a good compromise and it is precisely the collective agreement at the heart of the proposal that I see as the linchpin for fair wages.

The next step will be for the European Parliament to position itself and introduce amendments to Commissioner Schmit's proposal. In my role as EPP Group coordinator in the relevant EMPL committee, I will work to ensure that in future the right to fair pay is implemented, in-work poverty is prevented and decent wages are applied across Europe."