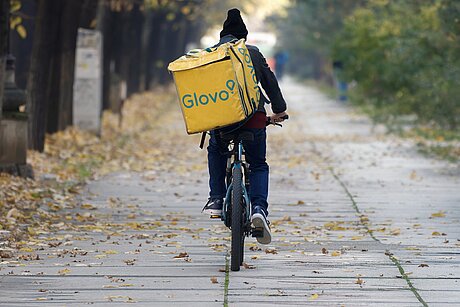 Research and daily contact with EZA’s member organisations underline the rapid growth of digital platform economy. Between 2016 and 2020, revenues in the platform economy grew almost fivefold from an estimated € 3 billion to € 14 billion. Already mor than 28 million people in the EU work through digital labour platforms. Forecasts predict that their number will reach 43 million people in 2025. Regarding the poor working conditions in this sector, trade unions are demanding revised regulations.

One of the biggest challenges is the genuine self-employment of most of these workers. The question remains, whether this situation corresponds to reality.

Trade unions estimate that at least 5,5 million are misclassified as self-employed. Also, the EESC's workers' wing puts its finger in the wound. During a session of ETUC about this topic their spokesman confirmed that it is very difficult to correctly classify the employment status of people. Consequences are inadequate labour rights and lack of social protection. Another issue is the use of algorithms in platform work which could raise questions of accountability and transparency.

In response, the European Commission is proposing a set of measures.

Actions of the EC

The EC announced several steps to deal with different elements of platform work. First, the European Commission sets out the EU's approach to regulating platform work in a Communication. The EC calls the national authorities and social partners to complete this at their level. With this communication the EC will lay the foundations on future global standards for high-quality platform work. The European Commission is proposing a directive and drafting guidelines to clarify the application of EU competition law to collective agreements of solo self-employed workers.

The intended result must be that people working through digital labour platforms can enjoy labour rights and social benefits to which they are entitled, as well as additional protection in relation to the use of algorithmic management. Secondly, the EC is seeking a common EU regulatory framework that will allow digital labour platforms to fully exploit the economic potential of the Single Market and create a level playing field.

To tackle the most important problems the EC is proposing a directive including the correct application of the employment status, transparency in algorithmic management and, enforcement and transparency and traceability. Regarding the employment status, the proposed directive seeks to ensure that people working through digital labour platforms are granted the legal employment status that corresponds to their actual work arrangements. The directive lists several criteria related to the relationship between platform and platform worker. If it meets at least two of those criteria, it is legally presumed that the platform is an employer. The people working through them would therefore enjoy the labour and social rights that come with the status of “worker”. Secondly, it is important to underline that the burden of proof cannot be reversed. The Directive also increases transparency in the use of algorithms by digital labour platforms, ensures human monitoring on their respect of working conditions and gives the right to contest automated decisions. These new rights will be granted to both workers and genuine self-employed. The third part gives National authorities more access to data and key information even when the platform is operating in several Member States, making it unclear where platform work is performed and by whom.