The situation of young people in the labour market continues to be characterised by instability in most European countries. Even though the number of unemployed young people has decreased since the financial and economic crisis was overcome, the increase in jobs has often not been accompanied by an improvement in the quality of work.

Of concern is the late first entry of young people into the labour market, the numerous precarious employment relationships, atypical employment contracts, internships without pay, the persistent long-term unemployment of young people and the large group of NEETs (Not in Education, Employment or Training) - with their well-known social consequences: an increasingly late departure from the parental home and higher age when starting a family, more difficult access to housing, lower social participation.

In the 2019/20 education year, EZA carried out project coordination on the topic of "youth employment", which consisted of a total of five seminars attended primarily by young workers' representatives - including those from the EZA Platform of Young Workers in Europe.

An improvement in the situation of young workers in Europe, more stability and planning security for them to be able to build their own lives - from a Christian-social perspective, this also has an ethical perspective. The worker is - as the project coordinator Mateusz Szymański from KK NSZZ "Solidarność" writes in his report - not first and foremost a workforce and a carrier of efficiency, but above all a human individual with dignity and specific human rights. 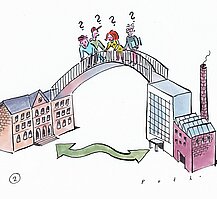