In the 2015 education and training year, EZA carried out a series of seminars with the aim of analysing the state of social dialogue on the European and national, sectoral and thematic level by means of selected questions. It became clear that the immediate prospects for a “new start” varied a great deal from country to country, and were manifestly less favourable in Central, Eastern and Southern Europe than in other regions of Europe.

In the five seminars comprising the project series, workers’ representatives from every country and from various sectors expressed a considerable need for capacity building and other education and training measures, the desire for Europeanisation of trade union work as a response to the globalisation of production and trade, and the opinion that collective bargaining was a key instrument for improving workers’ working and living conditions.

The series of seminars completed a three-year cycle of co-ordinated projects on the overall issue. Alongside it, EZA together with HIVA – Onderzoeksinstituutvoor Arbeit en Samenleving – conducted a research project on “Conditions and Criteria for Social Dialogue in Europe - The Workers’ Perspective”, the results of which were published as a book and presented at EZA education and training seminars.

EZA hopes the results and recommendations for action in this brochure furnish workers’ organisations and their multipliers with ideas for their daily work.

The brochure is published in German and English, author is Volker Scharlowsky. 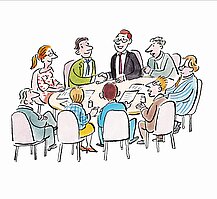