Workers’ organisations face huge challenges everywhere in Europe today: globalisation and the impact of the financial and economic crisis have exacerbated the situation in Europe’s labour markets and resulted in increasingly precarious and atypical employment conditions. Unemployment among young and old and mass unemployment have increased markedly, with dramatic effects on the families affected. The internationalisation of trade and production makes it difficult for workers’ organisations to organise themselves in multinationals. In addition, workers’ organisations in a number of European countries are struggling with a social dialogue that has weak foundations in institutions and/or is restricted by the respective governments.

Analysing these and other challenges and drawing up recommendations for action was the task of the co-ordination of projects covering a total of eight education and training events organised by the EZA in the 2014 education and training year focusing on “Trade union strategies to promote good labour relations in a changing industrial landscape”. In terms of issues, the seminars/working groups built on the previous year’s project co-ordination.

The brochure is published in English and is available online. 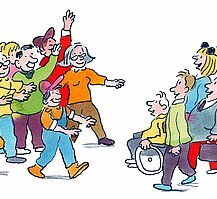