Checking the Balance Between Work and Private Life

In the 2013 budget year and under its “European Social Dialogue” education and training programme, the EZA project co-ordination on the issue of “Checking the balance between work and private life”, putting the focus on rising awareness of society and the social partners for the topic of compatibility of work and private life in the context of the ongoing economic recession.

The brochure is published in English and is available online. 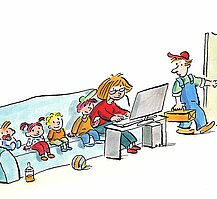 Checking the Balance Between Work and Private Life