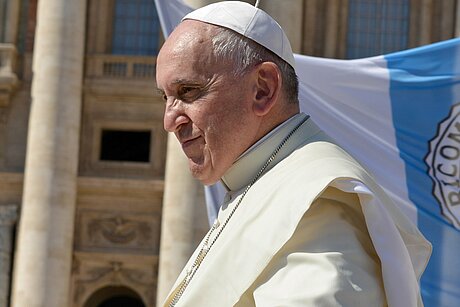 A good 150 pages, and thus one of the most detailed encyclicals ever: five years after "Laudato si", Pope Francis publishes "Fratelli tutti", a new papal teaching letter which he himself calls a social encyclical. In this work he once again denounces the exploitation of people and the environment and calls for a sustainable and social orientation in solidarity with one another. In doing so, Pope Francis also addresses issues that are central to workers' organisations such as EZA.

Already in the first chapter, Francis refers to "social segregation", such as " such as an obsession with reducing labour costs with no concern for its grave consequences" (20). The resulting poverty takes on forms that were considered to have been overcome. Francis writes: " In addition, a readiness to discard others finds expression in vicious attitudes that we thought long past, such as racism, which retreats underground only to keep reemerging. Instances of racism continue to shame us, for they show that our supposed social progress is not as real or definitive as we think." (20)

The problem is neoliberalism

One of the reasons for this social imbalance is an unleashed market that has broken free of its boundaries. Francis criticises neoliberalism in particular. (168)

With regard to the current Corona crisis, he writes: "The fragility of world systems in the face of the pandemic has demonstrated that not everything can be resolved by market freedom“. He further displays: "It has also shown that, in addition to recovering a sound political life that is not subject to the dictates of finance." (167)

It calls for a society capable of ensuring, in an efficient and stable way, that all people are integrated into a sustainable economy. In the fifth chapter, Pope Francis explicitly thanks civil society actors who "help to compensate for the shortcomings of the international community, its lack of coordination in complex situations, its lack of attention to fundamental human rights and to the critical needs of certain groups". (175)

Solidarity is the basis of just action

For Francis, in "Fratelli tutti", solidarity is the cornerstone of ethical action. He writes: " Solidarity is a word that is not always well received; in certain situations, it has become a dirty word, a word that dare not be said. Solidarity means much more than engaging in sporadic acts of generosity. It means thinking and acting in terms of community." (116) This solidarity is expressed in concrete terms in the service of man, which can take various forms.

In "Fratelli tutti", Pope Francis declares that Christian social teaching is born of love, expressed not only in trust and close relationships, but also in macro-relationships, such as social, economic and political ones. Pope Francis calls this "political charity" (182), which overcomes any form of "individualistic mentality". " Good politics will seek ways of building communities at every level of social life, in order to recalibrate and reorient globalization and thus avoid its disruptive effects." writes Francis. (182)

Pope Francis dedicates an entire subchapter to populism. He complains about the loss of value that the term has undergone, which has become "one of the polarities of a divided society" (156). The current usage "forgets the legitimacy of the popular term. The attempt to make this category disappear from linguistic usage could lead to the word "democracy" - namely the "rule of the people" - itself being wiped out."

At the same time, the pope finds sharp words against politicians who let populism degenerate into something unhealthy, in order to " to exploit politically a people’s culture, under whatever ideological banner, for their own personal advantage or continuing grip on power". (159)

The papal encyclical is a circular letter which serves as a form of announcement of the ecclesiastical magisterium of the Roman Catholic Church. In it, the Popes take a position on social or ecological issues, among others. "Fratelli tutti" is the second encyclical letter of Pope Francis and can be read here.