The digital conference of EZA's Platform For Young Workers (PYW). 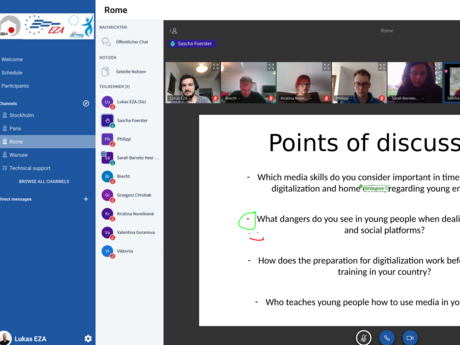 Detail of the digital barcamp at the EZA youth conference.

This year, the 9th EZA youth conference took place in the form of a digital barcamp. Virtual host was the Nell-Breuning-House in Herzogenrath, Germany.

Thanks to modern technology, this year's conference of EZA's Platform For Young Workers (PYW) could take place in virtual space. Under the title "More than one reality: Being young on the european labourmarket today!" the Nell-Breuning-Haus and the company Bonn.digital designed an online BarCamp. Using this innovative method, a conference platform was used to provide various spaces for exchanging experiences, developing ideas and holding discussions. These were moderated digitally and their contents were recorded. The members made various topics available in the form of so-called "pitches", which they then discussed.

Different topics came to the fore in the process. As already suspected during the preparation of this year's youth conference, topics related to the Covid-19 focus were very prominently represented. The members of the Platform noted that the current situation was very challenging, especially for young people in the transition between school and work. They demanded that future employees should be given more support in their search for a job, as counselling services and networking were currently only possible to a limited extent.

It also turned out that the perception of the corona virus is very heterogeneous, even among young workers. Disregard of hygiene regulations was attributed by the members of the platform in some European countries to a generally suspicious attitude towards government representatives.

This was accompanied by a special focus on the media competence of young people. The participants agreed that the critical or reflected consumption of media should be integrated as a fixed component of the school curriculum across countries.

As a further problem, the lack of access to digital infrastructure was discussed by many young workers in Europe and it was noted that more and more young people were being left behind in education and CET due to their economic situation. The pandemic had shown that in the field of youth work there was a great need to catch up in the handling and use of digital media.

There was general talk of a historical change in work, school and social life. The members of the EZA Platform For Young Workers saw many opportunities in the use of modern technology, such as better international networking and faster exchange of information. However, they also emphasised problems such as restrictions for people who do not have access to modern technology and therefore have little opportunity for social contacts.

Young members for the organisations

Focus on the EU and Europe

Participants agreed that, despite economic and social crises, public opinion on the EU is rather positive. A generational attitude towards the EU was also discussed. The members of the EZA Youth Platform noticed that young workers tend to emphasise the advantages of the EU. Older generations were more likely to show resentment towards the EU. The participants regard the EU less as an economic project and wish for more unity and appreciation of European values.