The further election results of the EZA General Assembly ... 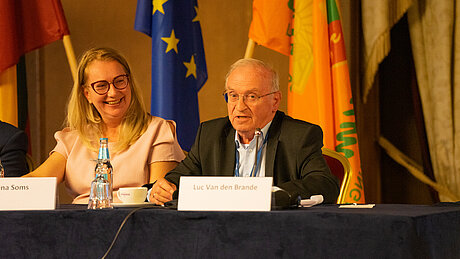 The following were confirmed in their offices as auditors: Heidi Rabensteiner, Bert van Caelenberg, Alfonso Luzi.

EZA-presidnet Luc Van den Brande commented on the results of the election: "Grateful to all of you committed to EZA over the past years, I want to thank all candidates and to congratulate the new elected members of the Council. EZA stays on an important and  turning point of its activities. Facing so many different challenges at the same time on climate change, greening the economy, digitalisation, high energy costs, social inequality, risk on purchasing power and not least the war in Ukraine, we have to reflect and act in solidarity. More than ever strong social and participative dialogue in partnership is needed to do so. The adopted EZA Vision 2030 will be the guideline for our educational programme and our actions, leading to clear positioning and impact on a Social Europe, where no one is left behind.
I’m convinced that EZA is well prepared to make a difference with all its members and the new elected Council."