The EUROBAROMETER results show a desire for more EU-level decision-making and a social agenda. 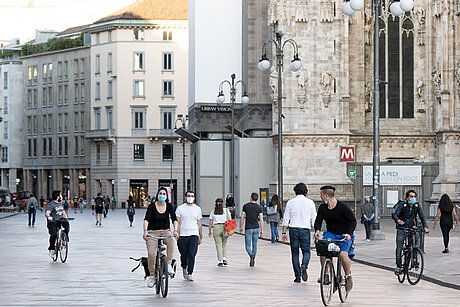 A social Europe is one of the central concerns of EU citizens. This is the conclusion of the Eurobarometer conducted by the European Commission, Directorate General for Employment, Social Affairs and Inclusion. It shows key findings on citizens' perceptions of Europe's social future in relation to social issues.

The survey was conducted in the 27 Member States of the European Union between 20 November and 21 December 2020. 27,213 EU citizens from different social and demographic categories were interviewed in person, by telephone or online in their mother tongue.

When asked how important a social Europe is to you personally, 42% find it very important and 46% fairly important. A social Europe, defined as a Europe that cares about equal opportunities, access to the labour market, fair working conditions and social protection and inclusion, is important to almost nine out of ten respondents.

When asked about the most important elements for the economic and social development of the EU, the top three issues are (1) equal opportunities and access to the labour market, (2) fair working conditions, (3) access to quality healthcare and the standard of living of people in the EU. More than seven out of ten Europeans believe that a lack of social rights is currently a serious problem.

Importantly for the future of Europe, a large majority of respondents believe that there should be more decision-making opportunities at EU level for the eight areas tested. As an example, the results for three areas: 76% want more decision-making at EU level for the protection of the environment and the reduction of climate change, 74% for the promotion of decent working conditions and 70% for more promotion of equal treatment between women and men.

Regarding the European Pillar of Social Rights, only 29% of respondents answered that they had heard, read or seen something about it.

A majority of respondents think that in the future social rights will play a more important role in building a stronger European Union (51%). The most important issue is health care, followed by other issues such as social protection, wages, education and lifelong learning, retirement income and pensions, etc.

Health care is also seen as an area where their national government should take action to prepare the future of Europe. There is also a strong belief in Europe: more than six out of ten Europeans think that there will be a more social Europe in 2030.