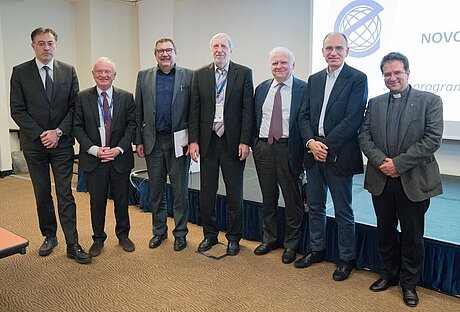 The 7th European Social Week (ESW) took place in Milan from 14 to 16 February 2019. More than 100 participants from 21 European countries addressed the great social, economic and societal challenges facing Europe for which realistic solutions must be found.

To start, the Chair of the “Notre Europe” institute and former Prime Minister of Italy, Enrico Letta, gave a synopsis of the current political situation in Europe.

EU Commissioner Marianne Thyssen said in a video message: “With our European Pillar of Social Rights we have put social matters at the top of the European agenda. (…) Our societies face rapid changes. Globalisation, climate change, demographic changes, migration and digitisation - we cannot stop these developments. But we should not submit to them passively. We must shape these changes – be the architects of our own future.”

The Member of the European Parliament Claude Rolin, former Secretary-General of the Belgian Confederation of Christian Trade Unions ACV-CSC, said: “Workers’ organisations have a special role when it comes to making the anticipation of changes a key part of their negotiations. The topic of lifelong learning must be at the heart of this, as it is not acceptable for companies to lay off a part of their staff in order to recruit employees with profiles that fit the new technologies better, because they have not invested in training with regard to the prospects of these changes”.

Transformation of work in the future

This first content block of the ESW contained three focal topics. The first focus was the search for an answer to the question: “Will we still have work for everyone?” John Hurley, Research Manager at Eurofound, answered this question with a whole series of statistics and figures. He explained that “the level of employment and working hours performed in Europe and the USA has never been as high as now”. The second focus addressed the topic “The Future of Work” with an input from Emmanuel Agius of the University of Malta. Agius highlighted the ethical aspects of work: “It is not the technologies themselves, it is our social, financial and economic policy and practices that determine what technologies can and should do, whether inequalities increase or decrease, and if people can live off their wage.” The third focal topic was introduced by Elke Hannack, Vice President of the Confederation of German Trade Unions (DGB) and Vice Federal President of the CDA, who dealt with the impact of digitisation on new forms of work: “A domain that shows how much digitisation changes the world of work is the so-called platform economy. (…) we certainly know two things: it is the form of ‘work of the future’ which in every respect is different from a so-called standard employment relationship.”

This second session looked at the reality and importance of social dialogue. Five trade union representatives from Bulgaria, Poland, Spain, France and Italy under the leadership of Jan Van Peteghem (HIVA/Belgium) debated the necessity of giving fresh impetus to social dialogue, both in their own country and on a European level. In most countries that is not an easy task. The trade union coordination levels often do not exist or vary in approach and tradition. The lack of a constructive dialogue tradition with representative workers’ organisations makes collective coordination very difficult. Yet between the lines of this debate there is a palpable positive motivation not to give up the struggle.

In the third content block, Antoine Hérouard, auxiliary bishop of Lille and Chair of the Social Committee of COMECE, the Commission of the Bishops’ Conferences of the European Union, stressed the necessity of greater equality, primarily in work, income, wealth and hence human prosperity.

Bea Cantillion, Director of the Herman Deleeck Centre for Social Policy at the University of Antwerp, presented an academic analysis of the growing inequality with clear proposals for politicians with regard to drafting more efficient measures in this area: “We must work simultaneously in several areas: social security, fair taxes, social investments, regulation of new forms of work and social economy. As a start, though, two of the 20 principles of the European Pillar of Social Rights can be put into practice: principle 14 on the minimum income combined with principle 6 relating to an adequate minimum wage.”