During the EZA educational year 2017/2018, HIVA presented a draft version of this paper to an audience at nine seminars held within the framework of the EZA educational and training programme. It provides a good example of thought and perhaps also of change in thought that can be observed in social debate over the last twelve months. Initially, there was great scepticism about the added value of the Social Pillar on the one hand and the potential to deliver what it promises on the other. There was even doubt whether the European institutions would be able to conclude this process successfully. At the end of the year, those sceptics had to admit that the process of introducing the Social Pillar was completed even ahead of schedule, complemented by other and new initiatives. There is an increasing awareness that it is not the end point but a renewed starting point.

The brochure has been published in German, English and Spanish. Its authors are Jozef Pacolet, Liesbeth Op de Beeck and Frederic De Wispelaere. 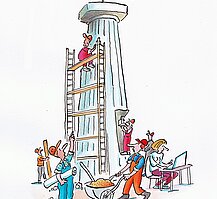